All the houses of Burano are colored, but the house of Bepi Suà (also called "Bepi of Candies") is the most colored house of the island: decorated with geometric forms of any type such as circles, squares, triangles, dyed of yellow, orange, red, blue and all colors of the rainbow. 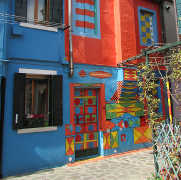 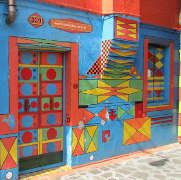 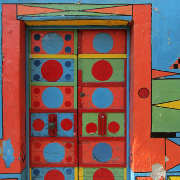 Bepi, aka Giuseppe Toselli, besides being a lover of painting was also a movie buff. Passion born during his working at the Cinema Favin, where he was employed as a janitor and maintenance. When the cinema was closed, he began to sell sweets in Burano's Galuppi Square: hence the name of Bepi of Candies.

Until the early eighties, during the warm summer evenings, he was used to organize the outdoor cinema in his campiello: after having hung a white sheet on the wall of his house, he has been throwing cartoons and funny movies for the delectation of the Burano's children.

The Bepi's house now appears in many postcards and is well known worldwide. It is without a doubt the most famous home of Burano .

Bepi is gone now, but all the "Burano's former children" who was usual to pass in front of his dwelling with friends, remember him as that strange man who every afternoon was always painting a new geometric shape on the wall of his house which was colorful, strange, dark inside and full of old objects such as television and film recorders.

Every day his house has been having a drawing in more until the year in which he died. Since then the house has been restored and its external facade has remained unchanged.

Still today the house of Bepi is most colorful home in Burano.

Where is the house of Bepi?

The Bepi's house is just around the square of Burano, and is reachable by a very narrow little street, which leads to a small square.

To make your journey easier, we publish below the map of Burano so you can reach the house of Bepi with ease.

Living in a colorful Burano home?

Would you like to stay in Burano in a typical colorful home, once inhabited by lacemakers and fishermen?

Below you will find some of our proposals. Click on the buttons to see the interiors and ask for their prices. 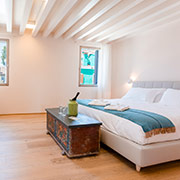 Casa Burano offers design accommodation on Burano Island and it's inspired by the hotel diffuso concept. It's rooms have air-conditioned and free Wi-Fi. 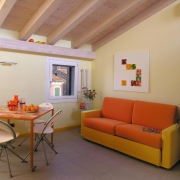 Casa Nova offers apartments in Burano, overlooking Galuppi Square. All its accommodations include a private bathroom, kitchen and air conditioning.

Click on the following link to see the full list of the best holiday apartments and holiday homes in Burano.

A tour to discover the Burano's lace-making and the Murano's glass blowing traditions on a leisurely 5-hour tour starting from Venice. Head into the Venetian lagoon to watch glass and lace-making demonstrations, with options to buy items at a discount.